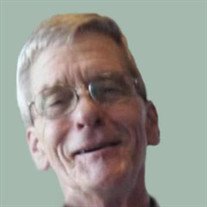 Gary Davis, 66, of Sibley peacefully passed away March 14, 2020 at his home in Sibley with his wife and daughter Rendi at his side. He fought a long hard battle these past few years. A memorial visitation will be held 1:00-5:00 pm Saturday July 18, 2020 at Rosenbaum Funeral Home in Gibson City, causal dress is encouraged. Memorial contributions may be made to the Gary Davis Family.
Gary was born March 18, 1953 in Gibson City. A son of Glenn and Mildred Davis. He married Sherri Brokate on June 24, 1994 in Gibson City. Surviving are his wife of twenty-five years Sherri Davis of Sibley. Two daughters Rendi (Kelly Harris) O'Neal of Elliott and Tera (TJ) Roesch of Gibson City and one son Scott (Wendy) Davis of Mahomet. Three brothers Bob (Janet) Davis of Gibson City, John (Ruth) Davis of Gibson City and Steve (Polly) Davis of Las Vegas and a sister Debbe (Mike) Holmes of Champaign. Four grandchildren Kayla O'Neal of Fisher, Justin O'Neal of Mahomet and Summer and Tristan Roesch of Gibson City. Also, four great grandchildren Bekah O'Neal, Jessi O'Neal, Emily and Landen Vaughn. He was preceded in death by his parents and brother Jimmy.
He drove a semi-truck for over forty years, having over a million miles to his credit and loved every mile...most of the time. He started in a small trucking company in Bloomington and moved to JM Jones and Super Valu in Champaign. He owned his own truck for a couple of years before deciding to get off the long hauls and going back to Bloomington pulling for Estes and then Saia before retiring.
The most important thing to Gary was his family. He enjoyed every minute spent with all of them and bragged on each one every chance he got. No matter what, the kids always brought a smile to his face.
In high school, Gary excelled at football and wrestling for the Gibson City Greyhounds. Gary was an avid golfer for many years. An injury made him give that up, yet he always brought laughs out on the course. In later years he became a huge fan of Illini basketball and football hardly ever missing a game. He also liked to follow the Chicago Bears and Green Bay Packers. You could often find Gary at the "round table" drinking coffee with the fellas, he never missed a day.
He was a member of the Gibson City Moose Lodge and the Gibson City United Methodist Church.
The family would like to extend a heartfelt thanks to Carle Hospital for the care given to Gary while a patient there over the last couple of years. A special thank you to Carle Hospice, "Gary's Team"- Wendy, Rachael, Kassi, Elizabeth and Vicki, who made this journey more bearable. The care, soft words, hugs and support shown to us will never be forgotten. We know that you felt our pain, you truly all are angels.

To send flowers to the family or plant a tree in memory of Gary Davis, please visit our floral store.

Please click here to view the video tribute
To send flowers to the family in memory of Gary Davis, please visit our flower store.