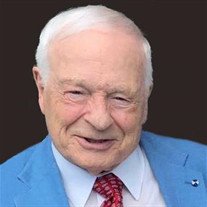 Donald James Reis, 87, of Jacksonville, Florida died Sunday September 22, 2019 at his home in Jacksonville, Florida. Beloved father, husband, "Papa," "Uncle Don" and friend to many, he was grateful to receive many visits, calls, and notes from friends and family throughout the days preceding his death.

Don was born June 26, 1932 in Bloomington, Illinois, as the youngest son of Orlin "Fred" and Helen Briggs Reis. He was raised in Gibson City and Kankakee, Illinois, and enjoyed an idyllic childhood in Central Illinois and with his paternal grandparents on their dairy farm in Iowa. He married Patricia Goodmon on May 9, 1964 in Weldon, Illinois, and the two enjoyed forty-nine years of true love and teamwork before she died on October 28, 2013.

Don's most important role was as the patriarch of his family who are grateful for his example of steadfast love and encouragement. He is survived by a daughter Amy R. (Robert) McGeorge of Jacksonville, Florida, and a son James (Jill) Reis of Quincy, Illinois, as well as four beloved grandchildren - Kellen McGeorge, Kendall McGeorge, Jamison Reis and June Reis, and nine special nieces and nephews. His only brother, "Gene" Reis preceded him in death.

Don graduated from the University of Illinois with a Bachelor of Science in Marketing and earned his Juris Doctor from the University of Michigan Law School in Ann Arbor, MI. He practiced law as the Managing Partner of Williams, Damon & Reis, in Grand Rapids, Michigan, before becoming the Director of Securities for the State of Michigan and ultimately the Chief Deputy Secretary of State for the State of Nevada. As an expert in Securities Law, he held leadership roles in a variety of regulatory organizations addressing legal and enforcement matters at both the state and national levels. Always interested in higher education, he served on the faculty of the Eli Broad School of Business at Michigan State University, as well as a guest lecturer at Wayne State University and Cooley College of Law. In retirement, he served as an expert witness in securities litigation and taught weekly Current Events courses to encourage other retirees to stay updated on politics and matters of national interest. Throughout his lifetime, Don served the Presbyterian Church, USA, at both the Presbytery and local church level as an Elder, Clerk of Session, guest preacher, and member of Committee on Ministries and the Permanent Judicial Commission.

His funeral service will be held at 11:00 am Saturday September 28, 2019, at the Gibson City United Methodist Church where he was baptized in 1932. The service will be officiated by Pastor John Tennyson and lifelong friend, Reverand Kurt Stiansen. Visitation will be held one hour prior to the service and a reception will follow at the Country Kettle.

A Celebration of Life will be held at 1:00 pm on Saturday, October 5, 2019, at the Concert Hall and Theater of Grand Living at Tamaya located at 3270 Tamaya Boulevard in Jacksonville, Florida, with Reverand Bill Hoff and Reverand Steve Goyer officiating; reception will follow in the same location.

Burial will be in Drummer Township Cemetery. Memorial contributions may be made to Don & Pat's church, Westminster Presbyterian Church of Fairfield Glade, 114 Stonehenge Dr, Crossville, TN 38558


To send flowers to the family or plant a tree in memory of Donald James "Don" Reis, please visit our floral store.

To send flowers to the family in memory of Donald Reis, please visit our flower store.