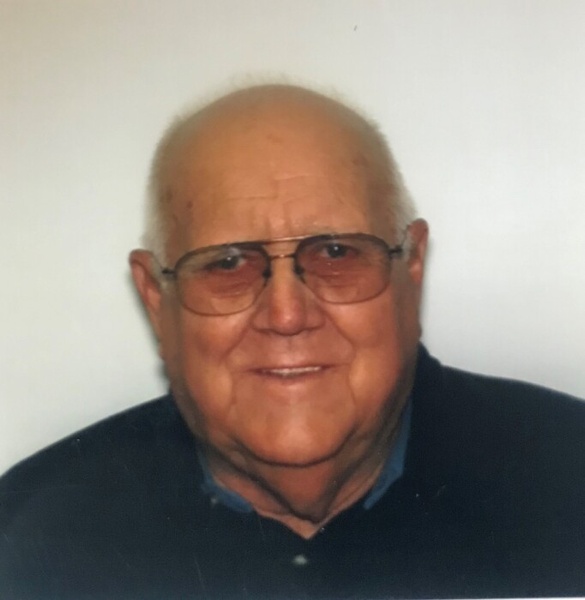 Donald E. May, 92, of Gibson City peacefully passed away at 10:55 am Wednesday March 9, 2022 at the Gibson Area Hospital-Annex after a courageous battle with complications from receiving the Covid-19 vaccine. A Masonic service will be held at 1:00 pm Sunday March 20, 2022 at Rosenbaum Funeral Home in Gibson City followed by visitation until 2:30pm. Funeral services will begin at 2:30 pm at the funeral home with Pastor Neal Kentch officiating. Burial with military honors at Drummer Township Cemetery. Memorial contributions may be made to St. Jude’s Children’s Hospital or to the Lee Lowery American Legion Post #568.

Don was born June 30, 1929 in Gibson City, a son of Henry and Fern Berkler May. He married Mildred Plackett in 1950. He married Beverly Huron on November 7, 1975 in Gibson City. She passed away March 14, 2017. He is survived by his children Gene (Shannon) May of Paxton, Kimberly (Gary Gilliam) May of Rantoul and Terry (Patricia) May of Paxton. Five grandchildren that made him very proud - Patrick May, Elizabeth May, Emily May-Grindle, Erin (Joe) Brucker and Heather (James) Ward. Twelve great-grandchildren whom had him wrapped around his little finger Tyler Pichon, Dylan Glad, Allen May, Owen Tavenner, Arabella Grindle, Grey Grindle, Kylie VanHorn Brucker, Kaylee VanHorn, Kayana VanHorn, Logan Maze, Lucy Brucker and Jude Brucker; one brother Edward May of LaSalle, one sister Dort Rutledge of Gibson City and several nieces and nephews. He was preceded in death by a great grandson Evan May and a sister Lyla Schmall.

Don was a proud Unites States Army Veteran and a Member of The Lee Lowery American Legion Post #568. He was a member of the Gibson City Masonic Lodge #733 AF & AM. Don worked for CIPS as a tree trimming foreman for many years being promoted to tree crew supervisor, retiring in 1994. He was a loyal Chicago Cubs fan. He enjoyed keeping his yard in pristine and perfect shape, going camping, reading and putting puzzles together. He found the greatest enjoyment when he was with his family especially his grandchildren and great grandchildren. He will be missed by all that knew and loved him.

To send flowers to the family or plant a tree in memory of Donald May, please visit our floral store.

To send flowers to the family in memory of Donald May, please visit our flower store.