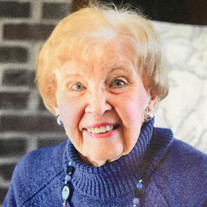 Deonna graduated from Gibson City High School and Illinois Commercial College. Deonna and Ed enjoyed traveling throughout the United States and overseas.
She was an active and life long member of the Gibson City United Methodist Church and belonged to the Gibson Area Hospital Auxiliary and was a Lifetime Honorary member
and volunteered in the gift shop for twenty seven years. Deonna enjoyed oil painting and received many awards for her art and she was a dedicated bridge
player and had many partners over the years.

To send flowers to the family or plant a tree in memory of Deonna Sauer, please visit our floral store.

To send flowers to the family in memory of Deonna Sauer, please visit our flower store.