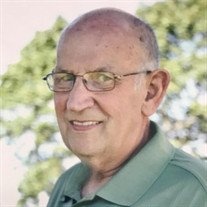 Clyde A. McRae, 78, passed away at 5:50 pm Wednesday December 23, 2020 at Carle Foundation Hospital in Urbana. Funeral services for Clyde will be held at 12:00 pm Tuesday December 29, 2020 at Rosenbaum Funeral Home in Gibson City. Visitation will be held from 10:00 am - 12:00 pm the day of the service. Burial will be in Drummer Township Cemetery in Gibson City. Memorial contributions may be made to the First Christian Church in Gibson City or to the Gibson Area Hospital.

Clyde was a member of the First Christian Church in Gibson City. He was an implement parts salesman for over fifty years, first starting with McGrath Implement and retiring from Birkey's Farm Store in Gibson City. He collected toy tractors. He enjoyed camping and making memories with all of his family. He will be greatly missed by all that knew and loved him.

To send flowers to the family or plant a tree in memory of Clyde McRae, please visit our floral store.

Please click here to view the video tribute
To send flowers to the family in memory of Clyde McRae, please visit our flower store.