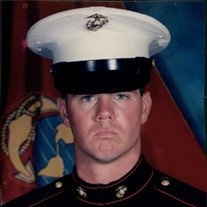 Bradley W. "Brad" Brandon, 54, of Mahomet, formerly of Gibson City died at
5:50 pm Tuesday November 20, 2018 at Carle Foundation Hospital with his
loving and devoted family and friends at his side. Brad's visitation will be 11:00 am-
1:00 pm Wednesday November 28, 2018 at the Gibson City Bible Church in
Gibson City; funeral to follow at 1:00 pm, Pastor Paul Thomason
officiating. Burial with full military honors will be in Bellflower
Township Cemetery, Bellflower, Illinois.

Brad was born September 15, 1964 in Gibson City a son of Gerald L. and
Ellen M. Raymer Brandon. He married Elizabeth M. Guidry on November 27,
2010 in Rantoul. She survives in Mahomet. Also surviving is a son -
Nicholas Brandon at home in Mahomet, stepson- Matthew Klaus of Rantoul,
Father- Jerry (Ruth) Brandon of Gibson City, Mother- Ellen (Jack) Johnson
of Gibson City. His siblings- Jackie (Terry) Rusk of Gibson City, Bryan
Brandon of Gibson City, Valarie (John) Nettleton of Bloomington; half
sisters- Jerilyn (Don) Hilgendorf of Gibson City and Sherilyn (Gerald)
Brown of The Colony, Texas. He was preceded in death by his grandparents.

He graduated from Gibson City High School in 1982 where he was a member of
the wrestling and football teams.

He was a member of The Lee Lowery American Legion Post #568 of Gibson City.
Brad enjoyed deer hunting, riding his Harley, and being out in his
Corvette. Brad was a loving husband, father, son, brother and friend and will be
greatly missed.

Memorial tributes may be made to the Nicholas Brandon Education Fund or to
Muscular Dystrophy Association. Rosenbaum Funeral Home is assisting the
family with arrangements.

Online condolences and memories of Brad can be made at www.rosenbaumfh.com

To send flowers to the family or plant a tree in memory of Bradley W. Brandon, please visit our floral store.

Please click here to view the video tribute
To send flowers to the family in memory of Bradley Brandon, please visit our flower store.