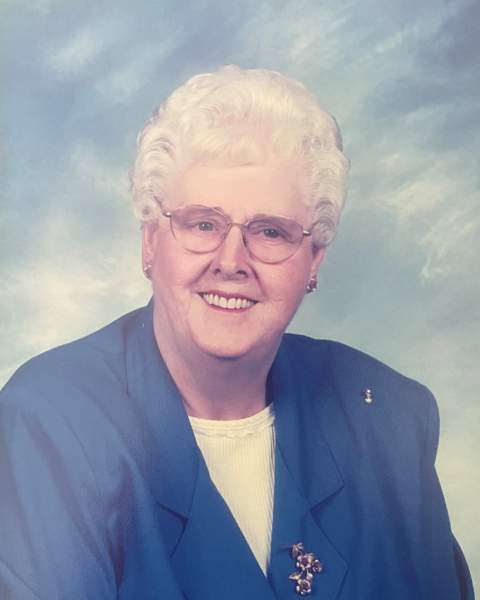 Elizabeth “Bette” Fredericka Mohart, aged 91, went to be with her Lord on Wednesday, August 24, 2022. Visitation will be held 5:00-7:00 pm Wednesday August 31, 2022 at Rosenbaum Funeral Home in Gibson City. Funeral services will be held at 11:00 am Thursday September 1, 2022 at the American Evangelical Lutheran Church in Gibson City with a visitation one hour prior to the services. Burial will be in Drummer Township Cemetery. Memorial contributions may be made to the American Evangelical Lutheran Church or the Gibson Area Hospital Foundation.

Bette married Henry Junior Mohart on October 26, 1952.  They spent 50 loving years together before he passed on September 18, 2002.  She is preceded in death by her parents and siblings Esther McClure, Irwin Mitze, Charlotte Fiedler, and Lucille Taylor and several nieces and nephews.

Bette grew up in the country around Warsaw.  After high school she became a nanny in Chicago for the Bill Newman family.  She had said she was not going to marry a farmer, but met Junior while he was on leave from the Army and she visiting home from Chicago.  They fell in love, married, and moved over to the Gibson City area to start farming.  She was a farmer’s wife and loved it from the beginning.  She held the home down while Junior farmed.  She was a great cook, seamstress, gardener, mother, and even helped with the farming when necessary.  She was a member of the American Lutheran Church where she taught Sunday School, was part of the Altar Guild, helped with weddings, funerals, and Christmas dinners, took care of the church flowers and bushes for many years, and, in her later years, sewed many quilt tops for the quilting ladies.  She and Junior were avid bowlers being in several leagues through the years.  She was a member of Blackford Club, Amvets Ladies Auxiliary, and Gibson Area Hospital Auxiliary.

To send flowers to the family in memory of Bette Mohart, please visit our flower store.