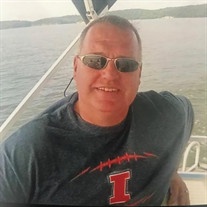 Lieutenant Anthony C. "Tony" Row, 44, of Gibson City passed away at 8:30pm Saturday March 23, 2019 at his home in Gibson City surrounded by his loving and devoted family. His funeral service will be held at 10:00 am Saturday March 30, 2019 at the Rosenbaum Funeral Home, 925 North Illinois Route 47, Gibson City, The Rev. Randy Sands officiating. Burial will follow at Drummer Township Cemetery. A Masonic Service will be held at 5:00 pm followed by visitation until 8:00 pm on Friday March 29, 2019 at the funeral home.
Tony was born May 28, 1974 in Chicago Heights, a son of Ronald R. and Dianna LaCosse Row. He married Stacey Lange on September 6, 2014 in Coffeen. She survives in Gibson City along with their three children Abigail, Emily and Tyler. Also surviving are his father Ronald (Dana) of Hillsboro, brothers Mike of Parkview, Iowa and William of Hillsboro and sisters Jenny Sage of Davenport, Iowa and Kerri Hartman of Hillsboro.
He was preceded in death by his mother.
Tony started his law enforcement career with the Hillsboro and Nokomis Police Departments. He then worked as a Correctional Officer at the Anamosa State Penitentiary. Tony also worked for the East Dubuque Police Department and the Jo Daviess County Sheriff's Office. Tony was currently serving as a Lieutenant with the Gibson City Police Department and was a former K-9 officer with both the East Dubuque Police Department and the Gibson City Police Department. Tony was a firearms Instructor and served in the Naval Reserves from 2000-2008.
Tony was a member of the Gibson City Masonic Lodge #733 AF & AM, The Cornbelt Shrine, The American Legion and was a member of the Gibson City Range Committee, instructing many safety classes. Tony was an avid outdoorsman enjoying hunting, fishing, camping and boating with his family.
Tony loved his family, friends and community he served. He was humbled by and grateful for the love and support he received throughout his battle with cancer.
Thank you to Dr. Suppiah, Dr. Vashi, Dr. Kotta, Pain Management and their staff at Cancer Treatment Centers of America. Thank you to Transitions Hospice for all of your hard work in getting Tony home and comfortable and for the compassionate care you provided to him and his family.

Memorial contributions may be made to The Shriners Hospitals for Children or Transitions Hospice.

To send flowers to the family or plant a tree in memory of Anthony C. "Tony" Row, please visit our floral store.

Please click here to view the video tribute
To send flowers to the family in memory of Anthony Row, please visit our flower store.