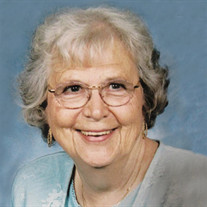 Ada Brucker Kennedy, 90, of Gibson City passed away at 12:35 p.m. on Monday, July 1, 2019 at the Gibson Community Hospital Annex Nursing Home in Gibson City.
Her funeral service will be held at 10:30 a.m. on Saturday, July 6, 2019 at the American Evangelical Lutheran Church in Gibson City with Rev. Chrissy Salser officiating. Visitation will be held one hour prior to her service at church. Rosenbaum Funeral Home in Gibson City is assisting the family with arrangements.
Interment will be at Mount Hope Cemetery in Sibley. Memorial contributions may be directed to the American Evangelical Lutheran Church in Gibson City or a charity of choice.
Ada was born on August 25, 1928 in Mellott, IN. The eldest daughter of Walter and Edna (Bowman) Gott. She married Robert C. Brucker on June 22, 1947 in Cropsey. He preceded her in death on July 18, 1974. Ada later married Bernard Kennedy and he preceded her in death.
She is survived by sons, Harold Brucker of Paris, MO, and Dean Brucker of Gibson City; one daughter, Phyllis (Kim) Fuoss of Gibson City. Also surviving are nine grandchildren and numerous great grandchildren and great great grandchildren; two sisters, Carol Rathbun of Fairbury and Rachel (Glenn) Tadlock of Rantoul and one brother, John Gott of CT.
She was preceded in death by a son, Alan Brucker; brothers, Robert and Richard "Dickie" Gott, and sisters, Phyllis Gott and Carrie Malinowski.
Ada enjoyed camping, traveling and spending time with her family. She was a member of the Red Hat Society and Daughters of the American Revolution. She was also a member of the American Lutheran Church in Gibson City for many years. She volunteered at the Gibson Area Hospital for many years. Ada helped her husband, Robert farm in the Roberts and Sibley area.
She was a blessing to her family and will be deeply missed.


To send flowers to the family or plant a tree in memory of Ada Brucker Kennedy, please visit our floral store.

To send flowers to the family in memory of Ada Kennedy, please visit our flower store.