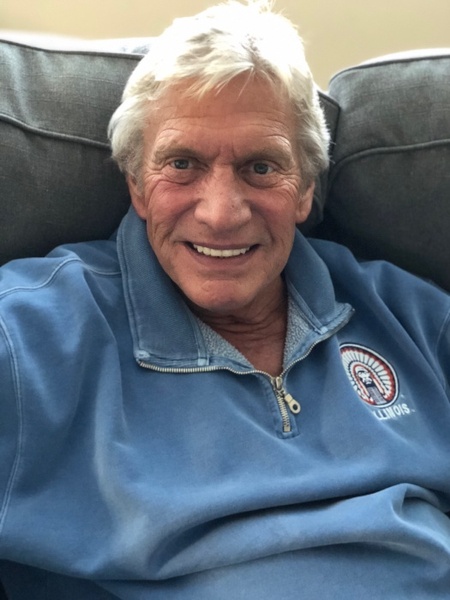 William Ralph McKinney, PhD October 4, 1947 – October 17, 2020 William McKinney was raised in Foosland, Illinois. We are sure he raised plenty of hell there, at the chagrin of his school teacher mother. He completed an undergraduate degree, eventually, at Southern Illinois University. He failed out his freshman year, subsequently became a Marine, and then returned later. In 1999 he was awarded SIU alumni of the year. He was the comeback kid. Bill McKinney wrote his own jokes. He had a distinguished career as Professor and Department Head in the Department of Parks and Recreation at the University of Illinois. Retiring in 2009. He loved his work and colleagues. Bill cared deeply for those he mentored. His advice was always sought after, even if the story took a detour from time to time. He didn’t have shallow conversations, he wanted to talk about the real stuff. Authored four books and over sixty articles and monographs. Was an avid Illinois Football and Basketball fan…or maybe it was the tailgating? He loved playing the drums and Motown music, but also aspired to be Jimmy Buffet. Any place with live music was where he wanted to be. He was the only Dad we knew who got the cops called on him for noise pollution. He hated traffic and following the speed limit. He danced with his daughters at their weddings. He called his friends, regularly. Bill continuously expanded his group of friends and treated everyone like they mattered. He held his relationships dear. Was a runner, water-skier, jeep enthusiast. Bill loved Hallmark movies, and called Lifetime “The Movie Channel” We debate regularly who he looked like: Ernest Goes to Camp, Joe Namath, or Harrison Ford—it’s easy to guess his take. He loved the ladies. He was accident prone. He had favorite ER doctors, and knew their names. Had a high pain threshold. He couldn’t cook a can of soup and often mispronounced common words. Bill had a weakness for chocolate, skittles, and peanuts. If you had any of these items, he would blame you for the inevitable binge. Told the BEST stories. There is a good one about a jeep in the middle of a frozen lake. Spoiler: the jeep didn’t make it. Genuinely loved his family. Adored his grandchildren. He pushed you, challenged you, and eventually you appreciated that support. We called his Arizona home, “Bill’s Last Resort.” He had the amazing ability to live in the moment. He would stare, take a deep breath and just drink life in. He was obsessed with sunbathing, often wrapping foil around large, cardboard, homemade visors, so he could get a tan at all angles. It is only fitting that he passed away lying by the pool. His passing is surreal as he seemed to be invincible- tempting fate several times over the years. He lived his life the way he wanted to live it. William McKinney was preceded in death by his Parents, Doyne and Earl McKinney, and his brother, Chris McKinney. Survived in death by three daughters and their husbands. Ashley McKinney and Kris Young of Salt Lake City, Utah. Abby McKinney and Brian Crimp of Sun City, Arizona. Emily McKinney and Jay Lopez of Long Beach, California. Bill had 6 Grandchildren. Jenevieve McKinney Young, Adalyn and Caleb Lopez, Vivian, Elijah, and Joanna Crimp. William was also survived by sister, Jayne McKinney and many friends. Memorial contributions can be made to the American Heart Association or the National Park Service. Visitation for Bill will be held 1:00-2:00 pm Saturday June 19, 2021 at Rosenbaum Funeral Home in Gibson City. A Celebration of Life service will follow at 2:00 pm with Pastor Gary Fairchild officiating. Burial with full military rites will be at Mt. Hope Cemetery in Foosland.

To send flowers to the family or plant a tree in memory of William R. "Bill" McKinney, please visit our floral store.

To send flowers to the family in memory of William McKinney, please visit our flower store.