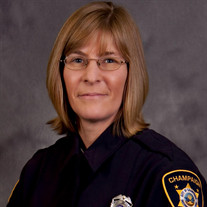 On Friday, January 10, 2020, Kristy L. Miller passed away at the age of 54 after fighting a courageous battle against cancer.

Kristy was born on November 24, 1965, in Kansas City, MO. Kristy was active during her childhood playing various sports. Along with playing sports, she loved to watch professional sports and stayed loyal to the Kansas City Chiefs. She was convinced that this would be the year that they would win the Super Bowl. She attended Pittsburg State University on a softball scholarship then changed her career path to join the United States Air Force. She joined the United States Air Force in March 1986. She was stationed at Chanute Air Force Base in Rantoul, Illinois, and Cannon Air Force Base in Curry, New Mexico, as an Aerospace Ground Equipment Mechanic. She received an honorable discharge in February 1989, and remained in New Mexico. Kristy was very proud of the time she spent serving the United States. She began her career in law enforcement shortly after being discharged from the United States Air Force at the Clovis Police Department in Clovis, New Mexico. She was employed with the Clovis Police Department from January 1991 to November 1996. On November 4, 1996, she became employed with the Champaign Police Department in Champaign, Illinois, as a lateral recruit. She remained a law enforcement officer with the Champaign Police Department until the time of her passing. She completed 23 years with the Champaign Police Department and nearly 28 years in the profession.

Kristy achieved many accomplishments throughout her lifetime; however, her most proud accomplishment was raising her daughter. She always made her daughter her number one priority. That commitment and dedication carried over to her friendships and career. Kristy was a compassionate and caring individual. If a person was in need, she was there to help in any way that she could. This was observed in both her personal and professional life. She learned how to balance these traits with her position of authority making her an effective police officer. She contemplated retirement, but couldn't leave "my guys" on the night shift that she worked with for several years. The things that she held most dear were her daughter, close friends, and her coworkers. Although Kristy was very devoted to her profession, she enjoyed spending her time playing golf, fishing, and reading. She especially enjoyed traveling with her daughter and close friends. She was always planning for future vacations to new locations. There was never a lost moment in Kristy's eyes. There will be a hole that Kristy once filled in many lives. She will be greatly missed by many.

Kristy was preceded in death by her father, James, mother, Sandra, and close friend, Michele Pieper. She is survived by her daughter, Megan (Rantoul, IL), #MillerTime friends, her godson Dalton Demay (Mahomet, IL) and two sisters. A celebration of life gathering will be held on Friday, January 17, 2020, from 4:00-7:00 pm, with law enforcement honor guard ceremony and walk through at 5:00 pm. The gathering will be held at the Rosenbaum Funeral Home, 925 North Illinois Route 47, Gibson City, IL 60936. Family has requested casual attire for the celebration of life gathering. Memorial contributions may be made to St. Jude's Children's Hospital or The Champaign County Humane Society.


To send flowers to the family or plant a tree in memory of Kristy Miller, please visit our floral store.

To send flowers to the family in memory of Kristy Miller, please visit our flower store.