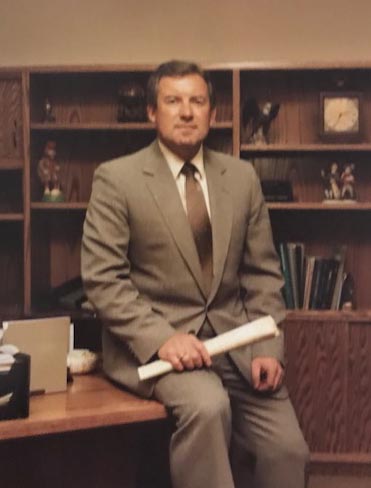 He had a quiet way about him. He was a man of few words, but when he spoke, they were important words. Surrounded by his family, Fred V. McCullough, age 86 of Gibson City peacefully passed away Thursday, April 8th at Villas of Hollybrook Memory Care & Reflections Center of Rantoul. Visitation will be held 11:00 am – 1:00 pm Friday April 16, 2021 at Rosenbaum Funeral Home. Funeral Service will be held at 1:00 pm. With Pastor Gary Fairchild officiating. Burial will follow at Drummer Township Cemetery, Gibson City. Memorials may be made to The Rantoul Villas of Hollybrook Memory Care Activity Fund or to OSF Hospice of Urbana.

Fred attended elementary and Junior High Schools in Rantoul. He moved to Gibson City before his Freshman year of High School. This would be when he met his future wife of 67 years, Janece Rainwater. They were married in Gibson City on June 21, 1953.

While attending Drummer Township High School Fred excelled in athletics including Basketball, Football, Baseball, and Track. An all Wauseca Conference Running Back, the Greyhounds did not lose a game his Junior or Senior Years. Fred was inducted into the Gibson City Hall of Fame as a member of the 1951 Greyhound Football Team. Plans to attend Millikin University were dashed due to home responsibilities. Following working as a butcher at a local grocery store, Fred entered the banking business, working at First National Bank in Gibson City, rising to Vice President. He enjoyed fishing trips with co-workers, Bud O’Neal, Ivan Donner, and Doug Knapp. Retaining his passion for sports, Fred played fast pitch softball on a local team. He, along with Eldon Christianson coached his son Gary and other local players on a Gibson City Eastern Illinois Baseball team.

In the late 70’s Fred was instrumental in the opening of The Bank of Gibson City, serving as President until his retirement in 1986.

Cubs and Bears games were much loved events in the McCullough household. Fred and Janece spent many winters in Florida, visited by their Daughters and Son in Laws, Tammy and the late Mark Craig, and Lisa and Mark Lange.

Fred’s favorite hobby was playing golf. He was one of a group of organizers responsible for the opening of Railside Golf Club. Always competitive, Fred was his happiest when on the course with his golf group.

In the mid-eighties, Fred purchased WGCY Radio Station and F. And G. Broadcasting Incorporated was begun, the F. for Fred and the G. for his Son Gary, again with the thoughts that it would be an asset to the community. In 2012 Fred received Gibson City’s Lifetime Achievement Award from the Gibson Area Chamber of Commerce.

Along with his passion for sports, Fred was a sucker for Dogs and El Caminos. Fred believed in helping others and gave generously to those causes he cared deeply about. It was a life well lived and enjoyed. He will be deeply missed by his Family and his Friends.

To send flowers to the family or plant a tree in memory of Fred McCullough, please visit our floral store.

To send flowers to the family in memory of Fred McCullough, please visit our flower store.