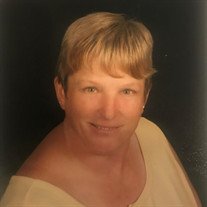 Cinda Marie Mattingly, 63, of Farmer City formerly of LeRoy passed away at 7:30 am Sunday May 3, 2020 at the Farmer City Rehabilitation Center in Farmer City. A private family graveside will be held at a later date in the Frankeberger Cemetery in rural Ellsworth. Memorial tributes may be made to the Cinda Marie Mattingly memorial fund c/o Jeremy Mattingly at Flanagan State Bank P.O. Box 150, 500 South Persimmon Drive, Leroy, IL 61752
Cinda was born July 10, 1956 in Bloomington, Illinois a daughter of Donald L. and Martha Humphrey Hafley. She married Claude Junior Mattingly on July 10, 1976. He passed away December 20, 2013. They were married thirty-seven years.
She is survived by her children Jeremy (Lindsay) Mattingly of Farmer City and Tina Mattingly of Aurora. Five grandchildren Austin and Dayton Craig and Vanessa, Landon and Logan Mattingly and two great grandchildren. Her father Donald Hafley of LeRoy, sister Jackie Hafley of Farmer City and brother Donnie Hafley of LeRoy. She was preceded in death by her mother.
Cinda was the manager of the Dollar General Store in Mahomet for several years. She was an avid bowler and a huge Elvis fan. She will be greatly missed by all that knew and loved her.

To send flowers to the family or plant a tree in memory of Cinda Marie Mattingly, please visit our floral store.

To send flowers to the family in memory of Cinda Mattingly, please visit our flower store.