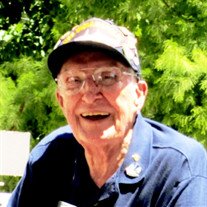 Arthur L Leenerman, 95, of Mahomet, IL passed away on Monday, November 4, 2019 at Heritage Health in Gibson City. His funeral service will be held at 12:00 noon Sunday, November 10, 2019 at Rosenbaum Funeral Home in Gibson City with Pastor Jim Davis officiating. Burial with military honors will be at Mount Hope Cemetery, Sibley, IL. Guests are invited to attend a short celebration of Arthur's life at the fellowship hall at St. John's Lutheran Church in Sibley, IL following the burial. Visitation will be held Saturday November 9, 2019 from 1:00-3:00 pm at the funeral home.

Arthur was born July 5, 1924 in Sibley, a son of Alonzo Louis and Ida Brucker Leenerman. He married Ethel L. Bryant on July 26, 1969 in Champaign they were married 47 years. She preceded him in death November 14, 2016. Arthur is survived by his son, Gregory (Susan) Leenerman of Broomfield, CO and his sister, Marilyn Gudenrath of Normal, IL. He is also survived by two granddaughters, Emma Leenerman of Grand Junction, CO and Kristen Leenerman of Seattle, WA, grandsons Jason Eaton and Ryan Cooper, both of Palmetto, FL and 3 great grandchildren. His step daughter Cynthia Cooper preceded him in death.

He is additionally survived by many cherished nieces, nephews and friends as well as 317 shipmates from the USS Indianapolis. Special thanks to niece Deb Steinman and friend Greg Bauman for their special support to Arthur as his health failed him.

Arthur served in the United States Navy during World War II aboard the heavy cruiser, USS Indianapolis. He was a Radarman 3 class. Arthur survived the sinking of the USS Indianapolis after it was torpedoed by a Japanese submarine in the closing days of the war. He was one of only 317 sailors who survived the sinking and spent four and a half days adrift on the sea before being rescued. Arthur was awarded the Purple Heart for wounds inflicted during the sinking and his ordeal in the sea.

Arthur was a member of the USS Indianapolis Survivors Organization, attending numerous reunions since its inception in 1960. He has been honored in several of the books and documentaries about the sinking of the ship.

Arthur was an avid outdoorsman who enjoyed hunting and fishing. He also enjoyed gardening and he grew trees from seedlings which he planted at the Mount Hope Cemetery in Sibley, IL.

Memorial contributions may be made to Pheasants Forever at www.ihuntil.com and The Nature Conservancy at https://www.nature.org/en-us/.


To send flowers to the family or plant a tree in memory of Arthur L. Leenerman, please visit our floral store.

Please click here to view the video tribute
To send flowers to the family in memory of Arthur Leenerman, please visit our flower store.